Eman Pulis: "I have been a startup all my life." The story of events making

Eman Pulis: "I have been a startup all my life." The story of events making 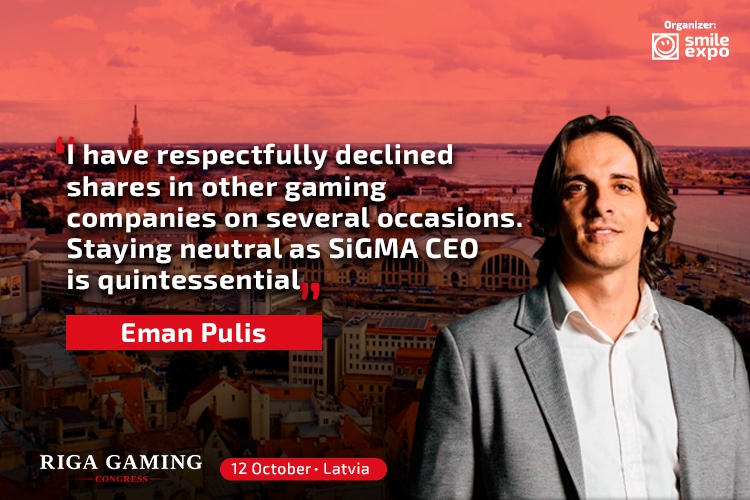 Eman Pulis is an expert with fifteen years of experience in organizing exhibitions, summits and conferences. His projects include the largest international gambling forum SiGMA in Malta. The first SiGMA gathered several thousands of participants; with every year, their number increases. At Riga Gaming Congress, Eman Pulis will tell how the work on such a large-scale event is conducted, present the SiGMA-2017 announce and take part in the discussion session concerning gambling legal aspects. We asked the expert to answer some questions about his personality and activity.

- You often refer to yourself as a “startup-romantic”. What does it mean for you and how does it describe your business approach?

I have been a start-up all my life, trying new things, often failing because I didn’t know better and also because I could have used a little more support and mentoring. I still consider my projects to be at the start-up level, but with a very solid proof of concept. The business, be it events (SiGMA, Affiliate Grand Slam), software development (SMSwarriors) or affiliation (BonusVikings), is growing healthily.

As a result, thanks to the SiGMA platform, I’m using this show as a launchpad for other start-ups to network, get the necessary mentoring and support, not only from us (our knowledge is limited), but especially from dedicated mentors and investors, who are attending the show for this purpose. We launched the SiGMA startup pitch last year and feedback this year is phenomenal with over 80 startups having applied already and some of the best gaming venture capitalists worldwide attending. We are giving startups around 20,000 Eur worth of goodies, from a booth at SiGMA to free office space in our Gaming Hub in Malta and much more. All of this is free!

- Tell us briefly about the results of the last SiGMA summit. How many participants, speakers, and presentations have been involved? What about the feedback? What was implemented for the first time?

SiGMA is literally doubling in size every year for the past four years. What started as a humble show with 1,300 delegates is this year anticipating 250 sponsors and exhibitors, 150 speakers and 6-7,000 delegates – including affiliates, operators, vendors, startups, investors and regulators. The floor plan is sold out six months before the show – which is unprecedented in this industry.

- You are known as a founder and organizer of SiGMA, but you also have other gambling projects. Could you say a few words about them?

I actually made it clear to myself that I would never do business in gambling outside SiGMA. I have been unofficially blessed with the privilege of putting the spotlight on Malta thanks to this event called SiGMA and I want to carry this project with no conflicting interests.

Imagine me, as the CEO of SiGMA, trying to sell a sponsorship to a games developer if I have vested interests in another games development company? Or trying to sell an operator a booth whilst at the same time competing for traffic with that casino with my own casino brand. Would these companies trust their brands with me and with SiGMA? No.

As a result of this line of thinking I have respectfully declined offers for shares in a number of companies, even when I saw that the profits were lucrative. I take the time to explain that my neutrality in the show is what made them approach me in the first place and, in all cases, they have their mind at rest that I would never have vested interests in any other gaming company.

This, I must say, is an intangible asset that I hold very dear.

- What could be considered as the most challenging in preparation to the event of such scale?

Oh my! So many challenges! Thankfully I’m a bit of an OCD (ha!) so I strive for perfection in every little step we make as a team – be it content writing, manning of stands, customer service – the biggest challenge is managing a team of around 200 employees on the two days of the show – from securities, ticketing staff, cleaning, speakers, booth builders – it needs to run as smooth as an orchestra.

Thankfully, I’ve been in the business of organising events for fifteen long years – be it parties, concerts, conferences or expos.

The bigger the show gets the more I realize on the need to delegate and resist micro-managing everything. To this extent, surrounding yourself with the best talent is paramount.

- Who is involved in the team of SiGMA organizers? How many people are necessary to get the massive event ready in one year?

WE are only around five people in total, working full time all year round. Closer to the show we beef up those numbers obviously.

- What is planned for SiGMA-2017 participants? Something special for the fourth congress?

After three years, we felt the time was right to shift to a bigger venue that meets the needs of a growing show. This year SiGMA will be situated a stone-throw away from the old charming city of Mdina. The focus by day will be at the Malta Fairs and Convention Centre (MFCC), then once the sun sets down, the focus will shift back to the official hotel, Corinthia San Gorg, and the surrounding restaurants in the city that seldom sleeps, St. Julian’s.

This year there’s something new, quite literally, for everyone:

- Are you aiming to expand the event geography and organize it in Europe, Asia, America? Or perhaps Malta and SiGMA are together forever?

Only time will tell whether we expand the show further – for the time being SiGMA belongs in Malta and there is little scope for us to relocate elsewhere. Malta has been very kind to us and we feel right at home with the show in this charming Mediterranean state.